The Story of the Kaimana

Sonnis art inspired me right away, when I first met her 3 years ago. Back then she was visiting Maui to participate in some SUP Downinder races and we met for an interview to talk about her SUP ambitions. At the time she was just beginning experimenting with her new passion; art. Her style was very different from what I have seen on Longboards and I was inspired by the themes of her art work, mostly revolving around the ocean. Since my passion revolves mostly around the ocean as well, I could not help but ask her if she would be interested to make a piece for our Longboard label JUCKER HAWAI’I. She was flattered by the idea and agreed to my proposal. Very soon after that she had a design for us and we could have a first prototype made. 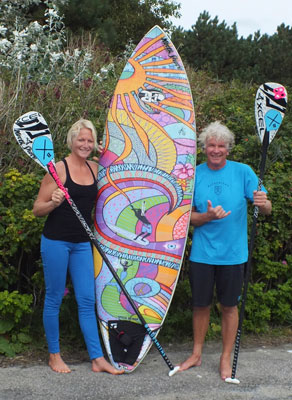 When Sonni returned to the island a few months later we had a board ready to show her. We were both very excited on how the board turned out. The “Kaimana” (Hawaiian: Power of the ocean) was born. We both knew that this board was more than just a longboard, it represents our passion for ocean- and board sports. In spring 2011 we launched the Kaimana on our online shop in Germany. The response was great but not overwhelming, nobody has seen a board with such a design. In its second year the “Kaimana“ became more popular as more and more people bought one for themselves not only to ride but to simply hang on the wall, because of the artwork. Now in 2013 the Kaimana is more popular than ever, in fact we got so many requests from customers that we made a special edition in a different truck / wheel configuration.

Check it out right here on our shop.

The next time Sonni showed up on Maui she brought a SUP-Surfboard with that her Dad *Jürgen Hönscheid had shaped for her. Sonni and her Dad used the same design on the Deck of the SUP-Surfer than we had for the Kaimana Longboard. I immediately fell in love with the board and our Longboard now had a big sister. I could not wait to get the Stand Up Surfboard and the Skatelongboard to be together in the same picture.

Now Sonni is back on Maui and is more successful than ever, she is now the most powerful SUP-Paddlegirl in Europe and is ready to launch her own Bikini with the Brand Chiemsee. In the last 3 years the Kaimana Skateboard has become a bestseller and Sonni and I are thinking if we should launch another Skateboard together as well. The Kaimana SUP will remain in the JUCKER HAWAI’I family and I am excited to try it out on the next swell.

Sonni will have an art exhibit on the island of Sylt starting August 17th to October 6th 2013 at the „galerie im kaamp-hüs“ if you are in Germany during this time make sure to stop by.

Stay tuned on our blog to see the progress we are making.

*Jürgen Hönscheid made himself a Name in Windsurfing as one of the first Windsurfers in Germany and with many years in competition. The family now owns a Surfshop on Fuerteventura and Jürgen is renowned surf board shaper.

You can purchase the Kaimana Longboard on our webshop right here. 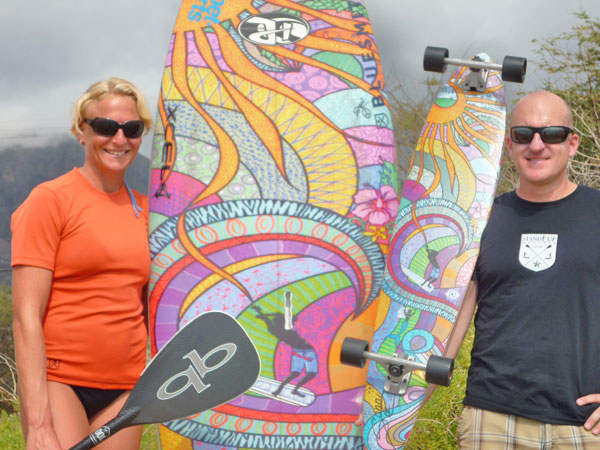